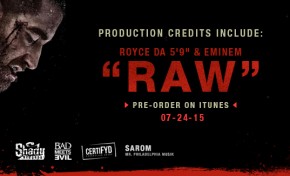 The stock rising philly music producers CertiFYDmusic and SaromSoundz produce a track called “RAW” for the legendary Eminem & Royce Da 5’9 who are also known as “Bad Meets Evil”. This track “RAW” will appear in the Southpaw movie soundtrack being officially released on July 24th 2015 on all music media outlets.

Eminem, real name Marshall Mather, is the most successful rap star to date. He has sold more than 155 million albums and singles, making him one of the world’s best-selling artists.[6] As of June 2014, Eminem is the second-bestselling male artist of the Nielsen SoundScan era, the sixth-bestselling artist in the United States and the bestselling hip-hop artist, with sales of 45,160,000 albums and 31 million digital singles.

Ryan Daniel Montgomery (born July 5, 1977), better known by his stage name Royce da 5’9″, is an American rapper from Detroit, Michigan. He is best known for his longtime association with Eminem as well as his solo career, recording primarily with Carlos “6 July” Broady and DJ Premier, as well as ghostwriting for the likes of Diddy and Dr. Dre. Royce is one half of the rap duo Bad Meets Evil with Eminem, 1/4 of the hip hop group Slaughterhouse, and 1/2 of the hip hop group PRhyme. The editors of About.com ranked him No. 30 on their list of the Top 50 MCs of Our Time (1987–2007).[1]

About SouthPaw the movie
Billy “The Great” Hope (Jake Gyllenhaal), the reigning junior middleweight boxing champion, has an impressive career, a loving wife and daughter, and a lavish lifestyle. However, when tragedy strikes, Billy hits rock bottom, losing his family, his house and his manager. He soon finds an unlikely savior in Tick Willis (Forest Whitaker), a former fighter who trains the city’s toughest amateur boxers. With his future on the line, Hope fights to reclaim the trust of those he loves the most.