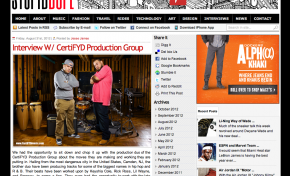 The interview is below. You can also click on the following link to view the interview on Stupiddope’s website: http://stupidDOPE.com/2012/08/31/interview-w-certifyd-production-group/

We had the opportunity to sit down and chop it up with the production duo of the CertiFYD Production Group about the moves they are making and working they are putting in. Hailing from the most dangerous city in the United States, Camden, NJ, the brother duo have been producing tracks for some of the biggest names in hip hop and R & B. Their beats have been worked upon by Keyshia Cole, Rick Ross, Lil Wayne, and Freeway, to name a few. They even had the opportunity to work with the late legend Heavy D before his untimely passing. We spoke about how they got started in their craft and how they have managed to make a name for themselves in such a short time span. You’re probably more familiar with the duo than you think, but now would be a great time for you to become a little more familiar with the fellas of CertiFYD. Check out the interview below, as well as some video’s from the fellas as well.
How & when did you get started making beats? Jay: We started really getting serious about music production in 2006. We started making tracks on the Yamaha Motif and Protools. Pi: I actually started on Fruity Loops for a little bit but after we got the Yamaha Motif and Protools the rest was history.

What influences your sound? Who were you influenced by when you were coming up?
Jay: I think everything from how you are feeling that particular day, to who you are working with to what you are listening to influences. Main influence would have to be just live music in general. I think that there is just something magical about live music. My dad was also an influence on me because he played guitar and gave me my first few guitar lessons.

Pi: Life, emotions, etc. Really just good music in general influences and inspires me. It doesn’t matter the style or genre as long as it feels good sonically. Being exposed to different music styles has definitely been a good thing for me.

What was your first major production job? How did the opportunity come about?
Jay: Keyshia Cole. That opportunity came up because of our work with Kwame. Kwame has always been supportive of our music and has been a mentor. The record that we collaborated from Keyshia Cole kind of happened. Initially we made it the track for an artist that Kwame was developing at the time and ended up being on Keyshia’s album.

What project, that you’ve worked on so far, has been the most rewarding?
Pi: Wow! Working with Heavy D.
You worked with a lot with the late legend Heavy D, how was that experience? What did it teach you overall? Pi: We learned so much in his last 2 years. We got to work with him closely before he passed and was able to produce for him on the album and also produce with him on the album. It was a great experience sharing those moments. Especially not knowing that he was going to pass. Hev taught us a lot and gave us a lot of advice. He was always giving us compliments on how talented we were and just a real positive caring person. Jay: Definitely Heavy D. Every time he would come to NYC to Daddy’s House to record he would give us a call. We actually went over to his Beverly Hills home just a few months before his passing to help wrap up his album. It was just an honor to have spent so much time with him during his last 2 years and an honor. He was more like an older brother than anything else. I still have his text messages saved on my phone from Hev. A lot of people that don’t know that besides he being an artist he was a great music producer as well.

What keeps you motivated to create new music?
Pi: Our passion for music.

Jay: Music is something that we love to do no matter what. Just being able to take a melody idea and make it into a record is always fun.

We all know working with family is tough, how as brothers do you two pull it off?
Jay: You know family is family. Sometimes it’s cool and sometimes it’s rough but at the end of the day I do my thing and P does his. It is just a matter of working together and looking at the big picture.

Pi: It’s probably one of the hardest thing to do is to separate the family thing with the music. I have my strengths and my brother has his but we balance and compliment each other as well. Sometime we work together and sometimes we work independently. There will be time I’m working on something and Jay will come and add stuff and make it bigger and vice-versa so it’s a good mix.

You have production credits on Beanie Sigel’s new album “This TIme”? What can we expect from a CertiFYD & Beanie Sigel track?
Pi: You can expect some good music. We produced the record called “Expensive Taste”. Make sure y’all go support the project.

Jay: Yep. You can expect a real record. We added some guitars and made it melodically a smooth joint. Something that you could vibe and ride to. We made the record sound like a sample. We got some “oos” in there that we mixed in there to give it that feel. It’s funny when we were taking care of the paperwork for this record we got a random call from the label asking if there was a sample in there. It was a good to know that we gave the record that feel just using some recording techniques. We got Corey Latif Williams who sang and wrote the hook and he did his thing.

How did that opportunity present itself?
Pi: Well we were working with Young Chris on some stuff and that led to linking up with Beans. Once he heard the “Expensive Taste” record it was a wrap.

Do you have any advice for rising or starting out producers?
Jay: Follow Your Dreams! Surround yourself by good talented people and just work hard.

Pi: Work on your craft and get your recording / engineering game up. The more you know how to work and engineer the better your mixes and music will be.

Name a few of your favorite MC’s right now? Is there anyone that we should keep an eye on?
Pi: A few of my current favorite MC right now is Meek Mill, the whole MMG, and of course the whole Philly scene. Besides that Hov, Ye, Kendrick Lamar, the Young Money camp. Look out for this new philly female rapper by the name of LeeMazin. She has a new mixtape dropping on September 11th. She is the hottest new female rapper in Philly and has been opening up for Meek Mill. Y’all can find her on twitter at @leemazin.

Jay: Also keep your eye for Corey Latif Williams. He is a phenomenal singer and writer and has been nominated for a Grammy twice. We are working on some great music together.

What can we expect from you guys in 2012 & beyond?
Jay: We are just working hard on various projects. We got a record coming on the new Glenn Lewis album. Glenn has an incredible album so stay posted on that. We got some more R&B, Pop and Hip Hop joints on deck for a couple of projects that are in the works.. We got some more collaborations with Kwame coming as well.

How can fans stay posted on what you guys are doing?
Jay: You could check out our website at www.certifydmusic.com and follow us on twitter @CertiFYDmusic